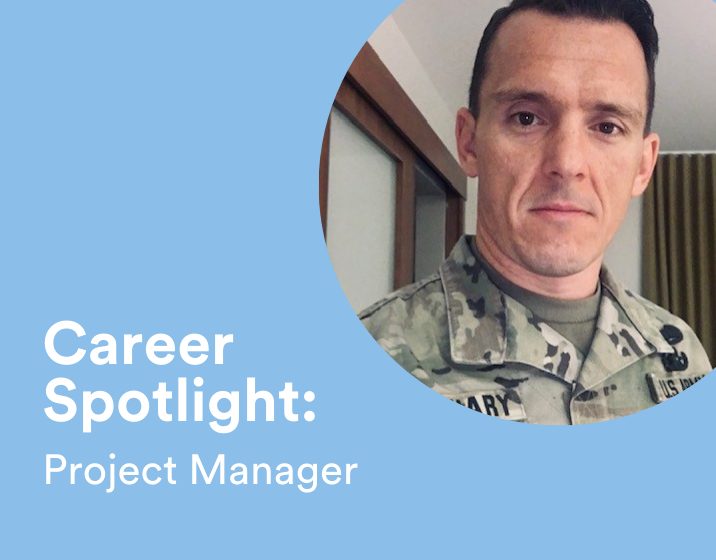 Discover how Kory Cavanary, a United States Army veteran, successfully transitioned from military service to a civilian career in the life sciences.

What’s your current position and how long have you been in this position?

My name is Kory Cavanary. I’m a project manager for Nuvasive, which is a spinal device company focused on making spinal procedures less invasive. I specifically work within the IT department and I’ve been with the company for approximately 3 years.

Can you give me an overview of what it means to be a project manager and how that fits into supporting IT?

A project manager, really essentially, is responsible for managing initiatives that an organization, department, or team takes on. So there’s the normal day to day operations that a company runs. Then there’s new activity that has a defined beginning and end date. Let’s say they want a new technology or to implement a new product. What they do is they essentially have project managers on hand to help define what that scope is, develop a plan, develop a communication with all key stakeholders, and then, pull a team together and really manage it throughout to completion, managing everything from costs, schedule, risk expectations, etc.

Within IT, it can mean a lot of things. IT is evermore prevalent in today’s society, and has its hands in all of the applications and technologies that you use, on a day to day basis. So, there’s a network and systems infrastructure that exists, and there are projects to essentially upgrade and replace that equipment. Those are projects that a project manager would be brought on to manage essentially all the teams within the department to achieve the objective.

How did you find your way to where you are today? Did you envision yourself as a project manager in the life sciences?

I initially joined the military right out of high school. I deployed overseas, was in the National Guard for about six years, then did some college sporadically. After a deployment, I came back and then I went to a university, went through the ROTC program where I had an exercise science major at the time — I was thinking about going into physical therapy. Around the time I graduated, around 2009, the economy wasn’t doing so well. The military was offering me a full-time job, with benefits, on active duty side.

I decided to go active duty. I was a logistics and explosive ordinance disposal officer. That’s a bit of a mouthful, but I did that for about 10 years, and gained a heavy operations background from there. I got stationed in San Diego to teach ROTC. When I transitioned out of the military, I had a lot of people that told me that my skillset as a military officer really gels nicely with project management, and the military has a framework that marries up very similarly to what the PMP project management framework looks like. So, I went and got the PMP certification.

From there, I did a lot of networking.  I heard about Biocom Institute’s Veterans Career Fair. Nuvasive was at the career fair and had a project manager position open. The hiring manager herself was a former Marine Veteran.  She was the IT project management office lead. She ended up hiring me at a higher level than what the job posting was really for because she had faith in my skillset and understood what that skillset could bring. She was like, “Listen, I can teach you it all day long. What I need is somebody that can manage things and can lead people.” And that’s how I got the job.

What education, training, or background does this job require?

If you’ve never worked in a civilian organization that can be a significant transition. I think you want to make sure that there are the right people in the right roles to help you through that process into transitioning and just providing that mentorship.

Being disciplined and having a good work ethic is critical to any job you go into — being able to roll up your sleeves and grind it out I think is one of the most appealing skillsets that you can bring.

Did you have any mentors when you started at Nuvasive, either within the company or outside of the company?

Primarily within the company, again, my hiring manager. She believed in my people skills and my leadership skills and management abilities.

There are some people that just want to do their job and execute, of course, but there are also people in every organization, team, group, department, that are like teachers. Find those people and latch onto them. I sought out those people — the people who usually show up early to a meeting, or answer their emails, or those ones that are willing to stay after the meeting and have a conversation with you… the ones that are not just trying to execute a task, but are interested in the success of the project, the company, and in helping you through it, because really, ultimately, if you’re on a team and you’re not interested in the people and in the success of the people that you’re working with and around, then you’re hindering the potential success of the project and the group.

What advice would you give to maybe a veteran or someone in active duty who’s considering, or maybe not considering this type of job or field?

If you’re transitioning into the life sciences, first ask yourself, is this something that you’re passionate about? Does it align with my cause, my goals, my values in life. Does the company align? I believe in leading a life where everything, in general, lines up, in some way, shape or form. Reflect on your life – what did I like about the military? What didn’t I like? Why am I transitioning out? And where do I want to be?

In addition to that, there are ton of networking groups out there. The key is to get through as much networking as you can. In my search for a job, I was going to career fairs every other day. Most of them were complete busts — but the point is you just keep going, and you have to believe that eventually through hard work and determination, you’re going to land something.

When you were growing up or when you were in the military, what sparked your interest in science or life sciences?

That’s an interesting question. I think you just fall into things sometimes. I took a life science class in high school and I was like, Oh, this is interesting…I was also a three-sport athlete and I was always interested in human performance. Some psychological, some physical, but I was just interested ultimately in the human performance. When I got to pick my degree I was not 100% sure that’s what I wanted, but exercise science and kinesiology really was something that aligned with that specific interest in human performance. I also got a psychology minor. So, when I got out of the military, it’s where I turned to in interest, and thought it was worth pursuing.

Where do you see yourself in the next five to 10 years?

One of the things that fills my cup is volunteering with Biocom Institute. This year I’m going to be helping with the Veterans Initiative planning committee for this year’s events. I got to speak at last year’s symposium about my experiences, which was really awesome. I want to do more of that. I want to continue to follow those passions. If you follow your passion, good things will happen. I want to continue to do that, and that’s why I’m continuing to help out with Biocom Institute.